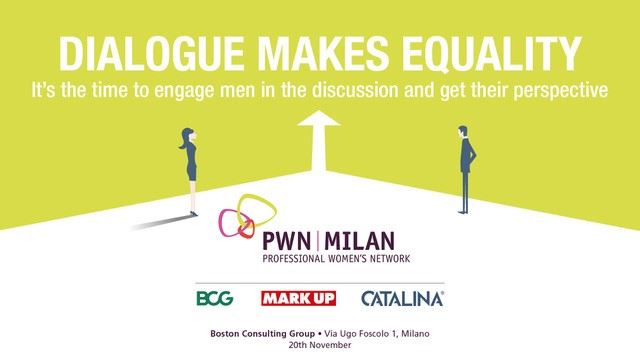 Hosted by Laura Villani, BCG Italy, we had a super engaging panel discussion moderated by the journalist Cristina Lazzati, Editor in chief for Mark UP and Gdoweek. The panelists were:

They all agreed that progress in achieving gender parity is still slow. At the end of 2016, the World Economic Forum’s Global Gender Gap Report estimated that, at the current pace, it would take another 170 years for the gender gap to be closed. This calls for immediate action.

Everyone, from individuals and households to organisations and policy makers, needs to commit to accelerating gender equality and ensure that half of the world’s population gets an equal chance to realise their full potential. In addition to being a moral imperative, gender equality is bound to have a great impact on economies.

According to FAO studied, if women had the same access to production resources as men, they could increase their farm yields by 20–30%. This could reduce the number of people suffering from hunger by 12–17% globally.

A research showed that rising women’s income by $10 has the same positive effects on children’s health and nutrition as a $110 increase in men’s income.

So how do we go about achieving such an ambitious goal? As this year’s International Women’s Day theme urges us.

If we all do our bit, in an action-oriented, pragmatic way, starting small but thinking big, we can move closer to achieving gender equality.

We already talked about gender equality in our previous events or workshop. This has been actually a completely different night from others, and trough the evening we had the chance to see the firms’ point of views on gender gap and to see and understand (and why not, to evaluate and to argue) some firms’ initiatives to close this gap.

But, after flows of worlds and videos and speakers’ contributes, what really stayed impressed in the memory of all participants is that winning the gender gap - the gap that still limits girls belief in their potential -is an effort that has to involve all of us, “it’s up to all of us”!

Let’s continue in talking about dream gap and gender difference, then. Let’s move on in inspiring women to feel they are important as men, both in personal and in professional life.

Get all women and men involved and see how world can be better in this way!